New Preorder of Products from P-BANDAI in Store on 8 December 2019 as follow: 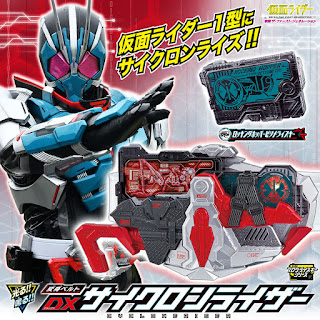 The item is based on a variant of the MetsubouJinrai ForceRiser, which in the film is used by the Humagear, Soreo Hiden (Koji Yamamoto) to become Kamen Rider Type-1. The character/ Humagear is a tribute to Aruto Hiden’s biological father, who ultimately served as Aruto’s parental guardian until the Daybreak Town Accident.
Nevertheless, the DX CycloneRiser is based on the prop/ henshin device in the film. The toy will consist of the main belt, and the Rocking Hopper Progrise Key. The CycloneRiser will be able to read other Progrise Keys, and the Rocking Hopper Progrise Key can be used with other Deluxe Kamen Rider Zero-One toys. 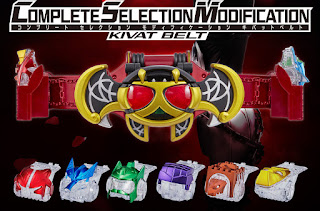 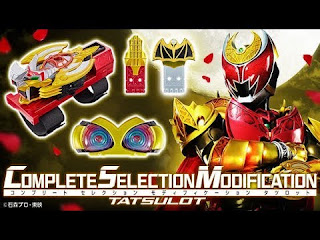 Preorder:
Tatsulot is a companion piece that becomes the transformation device for Kamen Rider Kiva/ Wataru Kurenai to achieve his Emperor Form. Whereas, the Complete Selection Modification version is a collectors’ edition based on the original toy, which features a heft upscale in size and details. The CSM Tatsulot release will include newly recorded audio by the original voice actor, Akira Ishida. In addition, the CSM Tatsulot will allow people to activate forms like basic Emperor Form, Flight Style, and DoGaBaKi Emperor Form as seen in the Hyper Battle DVD. it will feature a “voice recognition system,” which can be used in conjunction of phrases and can communicate with Kivat III via “wireless mode.”


To Make Preorder, You may Proceed to our store located at:
- No 2 Havelock Road Havelock II #03023 Singapore 059763
for a Black and White Receipt.
You may also opt to Transfer to our company Via Internet Banking or Paynow as follow:
- Bank Transfer: DBS Saving Plus 066-1-001955
- Paynow: 93843619 under Fat Toys Corner
Upon Payment or Transfer, Please E-Mail us back at fattoyscorner@gmail.com with the following detail:
- Name:
- Contact No:
- E-Mail Address:
- Transaction Reference no:
- For Which item:

Thanks for Taking Interest.

P.S:  Products Marked with:
** Non-Confirmation Preorder as inform by Supplier, Heavy Stock cut is Expected and Deposit will be Refundable Back to you.

FATTOYSCORNER
Our company specialized in toys like Transformers, Saint Seiya, 1/8 PVC Figurines and lots more! Interested parties for any of the products featured in our website or even not listed, do drop us a message or wish list at fattoyscorner@gmail.com or visit us at No 2 Havelock Road Havelock II #03-23 Singapore 059763, for more toys!